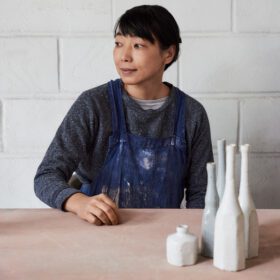 Akiko Hirai was born in Japan in 1970. She moved to London in 1999, studying ceramics at the University of Westminster and Central St. Martins. Akiko’s work is both a blend of Japanese and British studio pottery traditions resulting in asymmetrical, ‘imperfect’ organic forms.

‘My preference of choosing types of clay when making white ware is the dark and coarse clay most of the time. The whiteness acts as a membrane or a veil. The hints of the true nature of the material appear slightly on the surface. Dark clay which consists of many impurities induces strong chemical changes in heat and the trace of events remains under the veil when it cools down. White, on the other hand, is more stable because of its purity. It is already settled and has a feeling of stillness. Superficially my work appears to be quiet in white. It does not show the rawness of Mother Nature directly. A symbolic figure always looks more perfect than the actual person he/she is. Imagination and fantasy always reinforce the imperfection and achieve the perfection with its own originality. Therefore the completion of my work is done by the viewers. My work is a creation on its own.’ – Akiko Hirai

Akiko Hirai was shortlisted for the LOEWE craft prize 2019.

Akiko was the subject of a joint exhibition with Jason Collingwood in November 2021 – Nuno to Doro.