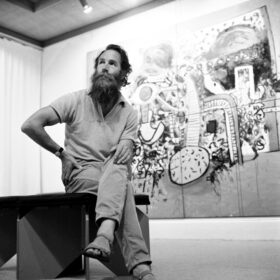 Alan Davie was born in Grangemouth and studied at ECA (1937-40). He performed as a jazz musician after war service but also wrote poetry, designed textiles and made jewellery.

From 1953 to 1956 Davie taught in London at the Central School of Arts and Crafts, where he became interested in African and Pacific art. He first visited St. Lucia in 1971 and began to spend six months a year there, bringing a Caribbean tone to his art.

Further influence on his work over the years include Paul Klee, American Abstract Expressionism, Zen Buddhism and Indian mythology. A major international figure, his Edinburgh Festival exhibition Magic Pictures was held at The Scottish Gallery in 1979.