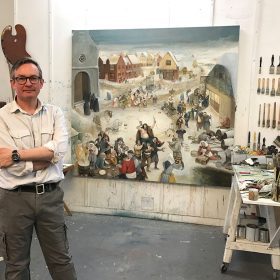 Born and raised in Aberdeen on the North East coast of Scotland, Barry McGlashan studied painting at Grays School of Art graduating in 1996 with first class honours. In 1998 he returned to Grays School of Art where he continued to teach in the drawing and painting department until 2005 when he left teaching to pursue painting full-time.

In 2001 he was awarded The Alastair Salvesen Scholarship through The Royal Scottish Academy which allowed him to travel in The United States for 3 months. Since that time he has continued to travel extensively in America, a country which continues to fascinate him and influence his work.

The world Barry McGlashan creates in his paintings ranges from the intimate to the monumental, not only in the variety of his subject but in his ability to capture on the largest or smallest canvas an interest with humans, with landscape and with a story. His knowledge of literature and art history informs his practice and he revels in producing scenes which beguile and intrigue in equal measure. Each painting is visualised as a stage set, perfectly orchestrated by a master auteur. McGlashan is insistent on the viewer playing their part and rather than giving away the whole plot we enter the narrative at a moment of the director’s choosing, invited to draw our own conclusions on an evolving story.