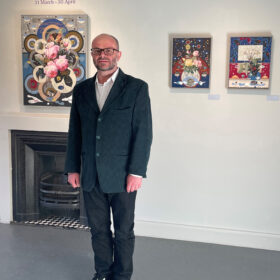 Colin Brown is a fine artist and former graduate of Duncan of Jordanstone, Dundee who has lived and exhibited in Europe for several years. He is now based in Stonehaven in the North East of Scotland. His paintings have received a number of awards, most notably a major Artist’s Grant from The Pollock-Krasner Foundation, New York.

After graduating, a John Kinross Scholarship awarded by the Royal Scottish Academy enabled him to spend four months in Florence. In 1988 he established a studio in Glasgow, where he began practicing as a full-time artist. He also spent four years in Dusseldorf painting and exhibiting with a number of German galleries.

Colin Brown’s practice draws upon a range of media, particularly acrylic paint and collage. His work draws upon human histories, random and specific mark-making, urban imagery, and a mix of handwriting and printed script to explore the spirit of modern society.

Brown has developed a strong international profile with regular solo and group exhibitions worldwide, including major solo shows in Hanover (1998), London (2010) and Singapore (2013). His work has received a number of awards, most notably an Artists Grant from the Pollock-Krasner Foundation, New York in 1996.

Colin Brown was the subject of a solo exhibition Days in Europa at The Gallery in March 2020. His latest series of works feature botanical themes, paying homage to the 18th-century Belgian flower painter Pierre-Joseph Redoute. In these new mixed media paintings, Brown combines art historical and contemporary references, ‘setting up a direct conversation with an artist from a different age’.