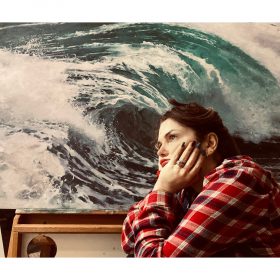 Dawnne McGeachy was born in Campbeltown, Argyll. She graduated from Glasgow School of Art in 1991 and attended the University of Ohio. In 2013, Dawnne won the Jolomo Bank of Scotland award for landscape painting. McGeachy’s dramatic paintings of the sea are inspired by her father’s career as a fisherman on the west coast of Scotland.

Growing up on the peninsula of Kintyre (Campbeltown) I was obsessed by the scale of the ocean, its physicality, poetry and my father’s voyages on it to catch fish. I loved his tales of the stars on a clear night and their use in navigation. However, the flip side of this was being awoken as a child by terrifying wind and rain, knowing that my dad was on the Firth of Clyde on a 45ft skiff. As the child of a fisherman I was aware of what the sea gave but also acutely aware of the cruelty of what it was capable of taking away. I go to the coast as often as I can, largely to build a bank of experiences and photographic reference material for the studio. I often take short films so I can study the movement when I get back to the studio. I love watching the wind drag across the surface, pulling and agitating, making slants and troughs, noticing the troughs get deeper and steeper as they collect the wind and realising this long , rolling swell originated in an ocean storm prior to breaking away from the disturbances of the unsettled sea miles away from the shore and me.