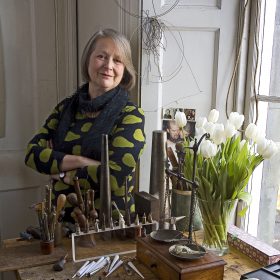 In 2001 she was awarded an MBE for services to jewellery and silversmithing and in 2005 won the Brilliantly Birmingham Jewellery Award; awarded to the jeweller who has made the greatest contribution to the world of designer-maker jewellery. Dorothy Hogg passed away on the 4th April 2022. She was one of The Scottish Gallery’s favourite contemporary jewellers and will be greatly missed.

Dorothy Hogg was the subject of a solo exhibition Modern Heroine in March 2022 and The Gallery held a retrospective exhibition in October 2014.