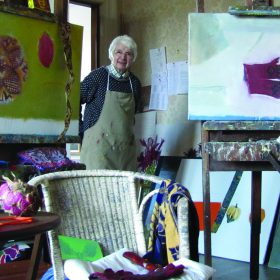 Elizabeth Blackadder was born in Falkirk in 1931. She studied at Edinburgh College of Art from 1949 until 1954 under Robert Henderson Blyth and William Gillies inter alia and enjoyed travelling scholarships to southern Europe and Italy. In 1956 she married artist and fellow Scottish Gallery exhibitor John Houston and began teaching in Edinburgh. One of Scotland’s greatest artists, she also enjoys recognition and success in London. Elizabeth is perhaps best known for her detailed yet lyrical watercolours of flowers, ‘table-top’ compositions using Oriental objects and her beloved cats. Trips to Japan and Venice and a greater emphasis on oil can be seen in landscape and townscape pieces as well as important still life series using decorated tins and boxes arranged with exotic fish, fruit and vegetables. In 2001, she was appointed Her Majesty’s Painter and Limner in Scotland. Elizabeth was also an inspired and skilful maker of original prints. We have oils, watercolours and original etchings in stock.