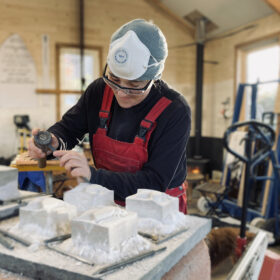 Based in Glenfarg in Perthshire, Gillian Forbes creates unique hand-carved pieces in a wide variety of British stone. The inspiration for her carving is drawn mostly from the natural world that surrounds her in rural Perthshire. After graduating from Glasgow School of Art, and subsequently studying architectural carving at Weymouth College in Dorset, Gillian started her stone carving business in 1995 in the small hamlet of Path of Condie. During this time, Gillian undertook a wide variety of both private and public art commissions, including carvings on Tay Street Flood Prevention Wall, large marine life elements in Morecambe, lettered panels on the Canongate Wall at the Scottish Parliament and most recently working with the sculptor John Maine to letter the memorial to Stephen Hawking in Westminster Abbey. Through her long-standing association with Memorials by Artists, Gillian became a founding member of the Scottish Lettercutters Association in 2001. In 2005 she was awarded a QEST scholarship, which enabled her to spend four months improving her model-making, casting and carving skills at the workshop of the French stone carver, Marc Chevalier Lacombe near Orleans, France. In 2008 Gillian won the J.D. Fergusson Arts Award Travel Prize to realise her ambition to travel to Carrara, Italy to learn marble carving at the Arco Arte Studio with sculptor Boutros Romhein.

‘I recently moved into a new studio on the edge of a wood in rural Perthshire and am constantly inspired by the natural elements around me. Even after 30 years of stone carving I still love the inherent qualities of the stones I choose to work with – sandstone, limestone, slate & marble. The marks that my chisels make on the stone and the durability of these pieces fascinate me.’ – Gillian Forbes

Gillian’s work is featured in Impressions In Stone in February 2022.