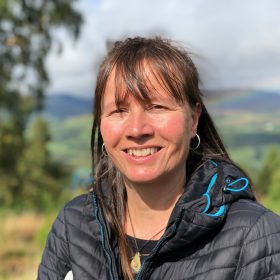 Gillian Murray was born in Perth, Scotland in 1970. She studied Fine Art (Printmaking) at Gray’s School of Art in Aberdeen, graduating in 1993.

After a move to Edinburgh she became an employee at Edinburgh Printmakers in 1996 until 2017. This involved working on print projects with a host of local, national and international artists as well as teaching courses in screenprinting and collagraphs. She now dedicates more time to creating her own artwork as well as freelance teaching and editioning.

She is a professional member of the SSA and has exhibited widely in Britain and abroad.
‘Over the years I have been making small trips mainly around Scotland & Europe, sketching and taking photos of the landscape and flora. Having collected my source information I create prints and watercolours inspired by the dramatic and beautiful views I have encountered.’