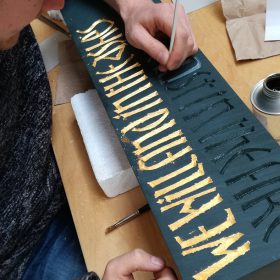 Gus Fisher is an artist and craftsman working with letter design and stone carving. He is the youngest member of the Scottish Lettercutter’s Association, a prestigious organisation that seeks to promote the traditional art of letter-carving.

Gus has developed an appreciation and love of lettering as an art form in its own right. He has a strong interest in the fragments of letters bequeathed to us from earlier civilisations, as seen in ancient ruined cities. Gus believes that a single letter still carries the integrity of the original script, even if the whole statement is unknown and the meaning long since lost. In his own work, he takes great care to attend to the personality and detail of each letter. Gus has mainly focused on the permanence of incised or bass-relief letters, hand drawn and cut into stone, but is now expanding into crafting other materials including metal. Working from traditional Roman capitals, he has developed bespoke and fluid lettering, specific for each and every piece. You can read about the creation of his piece inspired by William Wordsworth here.

Gus was awarded the Gold Arts Award by Trinity College, London as the top student across the country in 2007, working on self-directed tasks with other artists and helping to pass on his own enthusiasm and creative skills to youngsters in community workshops. Gus was also lead carver on the British Normandy Memorial, opened on Sunday 6 June 2021, the 77th anniversary of D-Day.