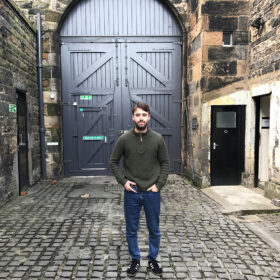 Originally from Manchester, Harry Morgan gained a 1st Class BA (Hons) degree in Glass from Edinburgh College of Art in 2014. Since graduating, Harry has exhibited at the 2015 British Glass Biennale in Stourbridge, where he was awarded the London Glassblowing Award for Emerging Talent. Harry currently works from his studio within Custom House Leith, Edinburgh.

Interested in the intrinsic ‘personalities’ of materials and their capacity to represent ideas, Harry’s current work explores the conflicting relationship between concrete and glass:

“Despite being composed of the same elements, glass and concrete appear as conflicting materials. With unclear borders and internal dimension, glass reflects ambiguity and intangibility. In sharp contrast, concrete is brutally physical; the word itself is used to describe absolutes and certainties. Both materials have strong social, cultural and polarised connotations; from the sumptuous history of Venetian glass to the Utopian concrete of post-war Brutalism. The use of glass in my work draws inspiration from the ancient Venetian glassblowing technique, murrine; where each rod or thread of glass is individually pulled by hand from a furnace. The glass is then arranged into a sequential structure and cast within concrete or precious metal, which binds them as one object. I’m interested in applying these traditional skills in alternative directions.” – Harry Morgan, 2017.

Harry was shortlisted and highly commended for the LOEWE Craft Prize 2019.