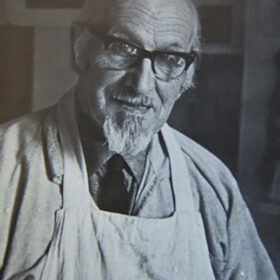 Ian Fleming was a notable artist and engraver and played an important role in the Scottish art world. He was successively a lecturer at Glasgow School of Art for many years and Warden of Patrick Allen-Fraser Art College at Hospitalfield and Principal of Gray’s School of Art, Aberdeen. He was a brilliant etcher, a practice he continued into old age and in 1987 he mounted a charming survey show of prints entitled Thoughts; one print produced each year over twenty years, forty years after his first show in the gallery. His wash drawings, perhaps influenced by his younger colleague Robert Henderson Blyth, have the same graphic and romantic qualities of his best etched work.