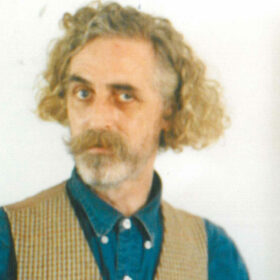 John Byrne studied at both Edinburgh and Glasgow Schools of Art in the late 50s and early 60s. A superb painter and draughtsman, the multi-talented Byrne is also a first-class playwright (‘The Slab Boys’; ‘Tutti Frutti’), his ear for dialogue as witty and acute as his eye for detail. Much of his subject-matter is overtly autobiographical, often featuring or referring to the Teddy Boy/Rock and Roll era of his youth.

His work is held in major collections in Scotland and abroad. Several of his paintings hang in The Scottish National Portrait Gallery in Edinburgh, the Museum of Modern Art and the Kelvingrove Art Gallery and Museum in Glasgow.

In 2004 he was made an associate of the Royal Scottish Academy, and was awarded full membership in 2007.