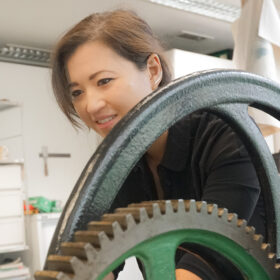 Kristina was the 2017 recipient of the Elizabeth Greenshields Foundation Grant, winner of the Anthony Dawson RE Young Printmaker Award and RSA Guthrie Award for Outstanding Artist under 35 and a 2017 Wyng Media Award (WMA) Commission Finalist. Kristina received the Villiers David Travel Grant and award 2015, Canadian General Governor’s Award for Excellence 2010 and the Government of Canada’s Millennium Award and Bursary 2009.

‘My works are a culmination and accumulation into site specific history to depict socio-cultural entropic narratives. They explore the correlation between architecture and sculptural landscapes of derelict and disused spaces. I seek sites where the intersection between function and intention have fallen into decline and disrepair, where untold histories recount themselves, in all their brevity, satire, beauty, and collapse.

I work within the reimagined human landscape, looking back to see within: the immense intimacy of the world we shape to suit our needs and what happens when their obsolescence renders them irrelevant.’