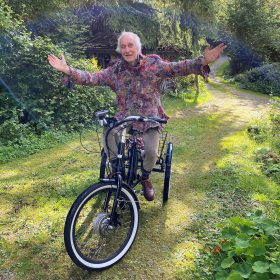 Malcolm Appleby was born in 1946. He studied at Central School of Art, Sir John Cass and the Royal College of Art in London before establishing his studio in Scotland in 1969. A silversmith and metal engraver, known for his imaginative use of line and form, he considers gold “just another lovely material to work with.”

The Scottish Gallery has been associated with Malcolm Appleby since the 1970s; the many facets of his work have brought joy to many, each piece sold marking the beginning of a journey of discovery around this senior artist. The Gallery honoured Malcolm Appleby’s seventieth birthday in January 2016, which marked over fifty years of a creative tour de force. Malcolm Appleby has dedicated his artistic practice primarily to engraving and pushing the boundaries of metalwork; constant experimentation has made him a master of his craft and in 2014 he received an MBE for his outstanding contribution to the arts.

2019 marked fifty years since Malcolm Appleby first set up his studio in Scotland and the exhibition 50 Golden Years in Scotland, featuring both jewellery and silversmithing, recognised his unique contribution to the arts. Malcolm’s infectious enthusiasm for his craft, his willingness to work with other artists and his pleasure in sharing his skills is characteristic of his generosity and pre-eminence. The natural world that surrounds Malcolm’s studio informs every piece; the artist’s inspiration unlimited in the abundance of the world around him.