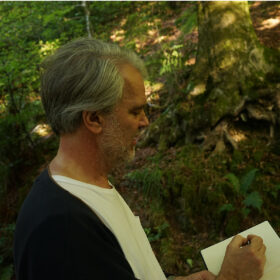 Martin Greenland was born in Yorkshire and studied at Exeter College of Art. He has lived and worked in Cumbria since 1985. In 2006, Greenland was awarded first prize at the prestigious John Moores Painting Prize, the UK’s largest contemporary painting exhibition held at the Walker Art Gallery, Liverpool. Martin Greenland is primarily a realist painter; his subject is embedded in the North British Landscape, at first familiar yet entirely imagined – in Greenland’s work, a subtle narrative about contemporary Britain quietly emerges.

I rarely come to start any work with the structure or concept fully formed. My paintings can best be described as improvisations. Sometimes strong images which exist somewhere in my head at the beginning form the resulting work. More often these starting forms radically change; the painting finding its own course. This is when I can describe painting itself and watching the landscape come into being and evolving , as exploring , going into new territory. I often find the reason for the painting or its concept, as I am part or often well on the way through. Very often I begin paintings with just pure paint, pretty abstract. I put paint down in fairly spontaneous ways to give me the unexpected which is always there ‘in nature’.