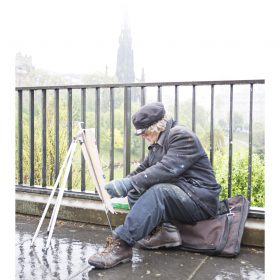 Michael McVeigh was born in 1957 in the post-war council estate of Lochee, Dundee located on the north west of the city, one of five children. He left school with no formal qualifications; however he wanted to be an artist and so began, unannounced, going to classes at Duncan of Jordanstone Art College, his presence being challenged eventually. James Morrison, then one of the lecturers, formalised his position and accepted him as a full-time student based only on his drawings and painting.

Since moving to Edinburgh in 1982 McVeigh has become a familiar figure seen regularly working in the city and until recently, had a stall on Rose Street selling his ‘lizard’ prints. ‘Lizard’ is his spelling of ‘laser’– colour copies of his original works, for sale at an affordable price. Life as a street artist has brought a certain amount of unwanted celebrity status, especially in recent years, becoming a cult figure sought out by the city’s stag and hen parties, eventually having to limit tourists to ‘one photo only’. His works are held in both public and private collections including town halls, pubs, fishmongers and a number of municipal and national institutions.