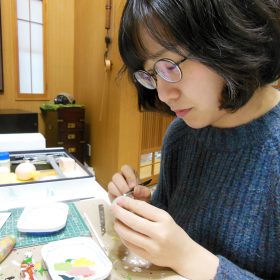 Miki’s intricate jewellery collection is strongly based on the Japanese aesthetic that finds beauty in impermanence, imperfection, transience and the ephemeral.

‘My work is based on the Japanese philosophical concept called Wabi-sabi, which means finding beauty in imperfection and transience. I read a book on the subject that said, ‘things are beautiful because they are fleeting.’ This can apply to various aspects of life, whether it be emotions or something as simple as a bunch of leaves in the street. The fact that everything will one day be nothing is beautiful; flowers grow up and then they die, that is the nature of life.’