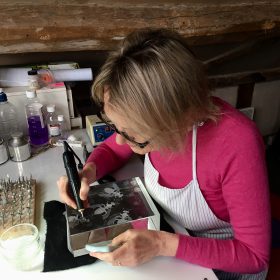 Nancy Sutcliffe is a graduate of North Staffordshire Polytechnic, Stoke-on-Trent, where she graduated in Design in 1979 and displayed an exceptional talent for drawing. Working as a medical and technical illustrator after graduating, and later as a freelance illustrator, it wasn’t until 1994 that she began working with glass – initially as a glass painter. In 2004 she attended a short engraving course at West Dean College taught by Tracey Sheppard, which in turn led Nancy to specialise in glass engraving. Engraving, gilding and painting are the key elements in her artistic practice, and she uses these techniques in various combinations to produce her work. Nancy works from her studio in Herefordshire.

“I became a glass engraver after a career as a scientific and medical illustrator. I find I have come full circle, and my subject matter today is informed by that training in precision and attention to naturalistic detail. I use a hand held drill in much the same way as I used to use a pencil, though now using diamonds and stones I am able to carve deeply into the crystal bringing the illusion of 3D. The addition of gilding has become a characteristic of my current work – precious metal leaf in rich patterns inspired by my time living in the middle east.”

Nancy Sutcliffe was the subject of a solo exhibition in March 2020 – DNA.