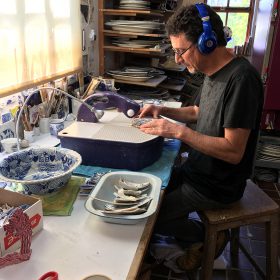 Paul Scott lives and works in rural Cumbria. He has been a professional artist for over thirty years and is best known for his research into ceramics and print. He creates individual pieces that are exacting and critical, blurring the boundaries between fine art and design. A leading proponent of ceramics and print, he has been instrumental in demonstrating the contemporary creative potential of a combination used in industry for hundreds of years to mass-produce decorative wares and tiles. In 2010, he designed thirty linear metres of the record breaking Hanoi Mosaic Mural in Vietnam. Confected, Borrowed and Blue… an Installation by Paul Scott toured throughout 2015 – 2016 at various locations throughout the UK.

‘Over the years, my artworks have commemorated and examined a range of issues, from the Foot and Mouth crisis to the impact of energy extraction and production on our environment… I have inserted nuclear and coal fired power stations as well as wind turbines into pastoral landscapes, exploratory oil rigs in pristine arctic locations – and placed landscapes with fracking rigs onto cracked platters. In March 2011, the Fukushima Daiichi nuclear power plant in Japan was enveloped by tidal waves following the Tōhoku earthquake and tsunami. The ensuing events cut power to water-cooling pumps and nuclear fuel rods melted down, creating the largest nuclear disaster since Chernobyl in 1986. Scott’s Cumbrian Blue(s) Fukushima series commemorates the event. All works have been made on Willow pattern platters made in Japan. Although the Willow Pattern was originally made in late eighteenth century Staffordshire to imitate Chinese porcelain wares, it is a jumbled confection of designs with decorative details incorporating elements not only of Chinese porcelain but also Japanese Imari ware. It has been produced all over the world. I collaged an erased piece of an old English Willow pattern platter (c.1840) into the scene. I removed the original print and replaced it with an in-glaze print after Katsushika Hokusai’s woodblock print The Great Wave off Kanagawa (c.1830). The nuclear power plant can be seen behind garden buildings.’ – Paul Scott, 2016

Public and Private Collections include:

Paul Scott presents a solo exhibition, Scenery, Samplers & Souvenirs, in May 2021. This exhibition presents new artworks which update historical transferwares for the 21st century, including a selection from his New American Scenery series. The exhibition also features work made as a result of his Gardens of Lyra collaboration with Spode and Fortnum & Mason and also presents new works from his Cuttings Series.