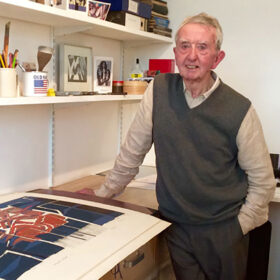 Peter Green studied at Brighton College of Art and the Institute of Education University of London. Having qualified as a teacher, he initially taught at a secondary school in East London where he established a thriving school printing press, producing small books and original prints. During this time he developed his own work as a printmaker and was elected to membership of the Royal Society of Painter-Printmakers in 1958. In the early 1960s, the director of London Graphics Arts (also known as The London Arts Group), Eugene Schuster, recruited Peter, who joined an impressive list of young printmakers. Schuster held an extensive range of prints by European Modern masters (including Picasso and Matisse) and commissioned new editions from young contemporary artists for placing primarily in public buildings across Europe and North America. Peter produced a number of large plywood block prints, printed without a press, with most of the colour being applied directly using paper stencils – a method that the artist still uses to this day.