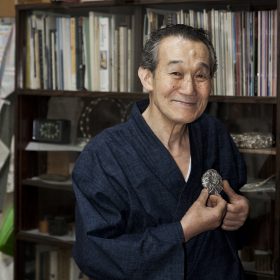 Professor Yasuki Hiramatsu was born in Osaka in 1926. He had a prestigious career as an educator and had been Professor at the Tokyo National University of Fine Arts and Music. He had also been the Director of the Japan Jewellery Designers Association. His work can be seen in many international collections.

Yasuki Hiramatsu was a pioneer of contemporary jewellery in Japan. He explored and re-interpreted traditional metalworking skills in order to create modern art. Hiramatsu’s works radiate simplicity, purity and strength.

Concentrating on textures, form and light, his pieces capture an inner beauty and warmth that seem to come alive as light gently reflects across the surface. “The metals which I mainly use are also like living things,” he said, “when I make a piece, I play, worry, struggle with it and encourage it.”

Throughout Hiramatsu’s distinguished career, he won several prizes. In 1991 he was bestowed with the forty-first Crafts Award in Excellence by the Japanese Government Ministry of Education and in 1994, was the first non-European to be awarded ‘the ring of goldsmiths’ from Gelleschaft fur Goldschmiedekunst in Germany.