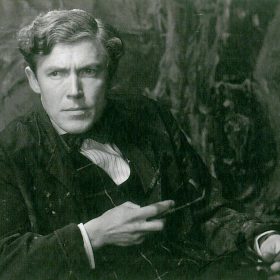 Born in 1916 in Broughton-in-Furness, Sir Robin moved to Scotland in 1930. He studied at Edinburgh College of Art from 1936 to 1940, becoming a lecturer there in 1947. He was a significant and influential presence on the Scottish Art Scene for more than three decades. He had numerous commitments as Head of School of Drawing and Painting at Edinburgh College of Art and eventually President of the Royal Scottish Academy. However, he was, above all, a practising painter, who, in spite of the demands upon him was still able to produce throughout the years a distinguished and original body of work. He received many honours throughout his life including being knighted for service to the arts in Scotland in 1976.