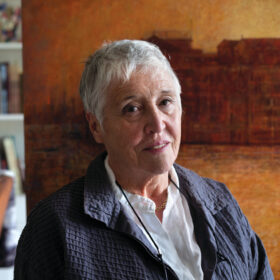 Victoria Crowe studied at Kingston School of Art from 1961-65 and at the Royal College of Art, London, from 1965-68. At her postgraduate show, she was invited by Sir Robin Philipson to teach at Edinburgh College of Art. For thirty years she worked as a part-time lecturer in the School of Drawing and Painting while developing her own artistic practice. She lives and works in West Linton, Edinburgh, and Venice. Her first one-person exhibition, after leaving the Royal College of Art, was in London and she has subsequently gone on to have over fifty solo shows.

Victoria Crowe is a member of the Royal Scottish Academy (RSA) and the Royal Scottish Society of Painters in Watercolours (RSW). She has exhibited nationally and internationally and undertaken many important portrait commissions, including RD Laing, Peter Higgs and Jocelyn Bell Burnell. She has received many bursaries and research awards and her work is held in numerous public and private collections worldwide.

In 2000, her exhibition A Shepherd’s Life, consisting of work selected from the 1970s and 80s, was one of the National Galleries of Scotland’s Millennium exhibitions. It received great critical acclaim. The exhibition toured Scotland and was re-gathered in 2009 for a three-month exhibition at the Fleming Collection, London. Victoria was awarded an OBE for Services to Art in 2004 and from 2004-2007, she was appointed Senior Visiting Scholar at St. Catherine’s College, Cambridge. The resulting work, Plant Memory, was exhibited at the Royal Scottish Academy in 2007 and subsequently toured Scotland. In 2009 she received an Honorary Degree from The University of Aberdeen and in 2010 was elected a Fellow of the Royal Society of Edinburgh.

In 2013, Dovecot Studios wove a large-scale tapestry of Victoria’s painting Large Tree Group. This collaborative tapestry was acquired for the National Museums Scotland. In 2015, Victoria was an invited artist at Dumfries House and in 2016 a group of work by the artist was acquired by the National Galleries of Scotland. Victoria was commissioned by the Worshipful Company of Leathersellers’ in 2014, to design a forty-metre tapestry for their new hall in the city of London, which took over three years to weave and was installed in January 2017. Dovecote worked with Victoria Crowe to produce a new tapestry inspired by a detail from her painting Twilight, Venice, 2014. The new tapestry, Richer Twilight, Venice was completed and unveiled at the end of September 2019.