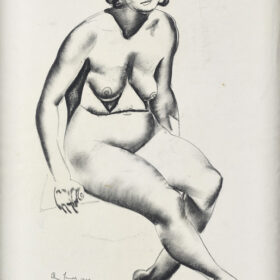 Born in 1894 in Cambuslang, Glasgow, William McCance studied at Glasgow School of Art from 1911 to 1915. He was a conscientious objector in World War I and was imprisoned. Following his discharge in 1920, McCance moved to London, where he was employed as a teacher and art critic writing for The Spectator. In the early 1920s, McCance developed a near abstract style, indebted to the work of Wyndham Lewis and the Vorticists, one of the very few Scottish artists to follow such a path. From 1930 to 1933 he worked as controller of the celebrated Gregynog Press in Wales. A collection of his paintings is held in the National Galleries of Scotland.