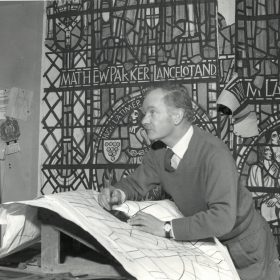 Like many of the significant Scottish artists of the 20th century, William Wilson was not satisfied with the restrictions of one medium, but focused his energies on three.

Throughout his life he fixed intently on each in turn, etching, watercolour painting and latterly stained glass design, which brought him an international reputation. However, it is his work in etching, made between 1925 and 1940 which is arguably his most powerful and successful work, and a unique contribution to Scottish art history. Whilst the previous generation of Scottish etchers, DY Cameron and James McBey, had been primarily concerned with the documentation of landscape and atmospheric effect, Wilson’s interest lay in the structural qualities of an image, often realised through architectural subjects; relishing the angular juxtapositions of roof, wall and landscape. Wilson’s draughtsmanship is superb, his line as suggestive as Eric Gill and his tonality in a tradition that goes back to Samuel Palmer and Rembrandt. His etchings are visually rich and suffused with atmosphere and represent a body of work to match McBey and Cameron.