The Scottish Gallery is delighted to host Davy Brown's 70th birthday exhibition with The Gallery. Based in Dumfries and Galloway, Davy specialises in still life and landscape painting. He is also a specialist in post-war British art.

"It is fifty years since my first exhibition in the Citizens Theatre, Glasgow. I was 70 at the end of March, by which time I had been in self-imposed lockdown for two weeks, and so this exhibition is the first meaningful way in which I have been able to celebrate my birthday. I am deeply grateful to The Scottish Gallery for hosting this exhibition in this form, and for showing my work for the first time. I hope the beauty of my surroundings has been captured through my work and will prove to be uplifting to those who view it in these difficult times." Davy Brown, 2020 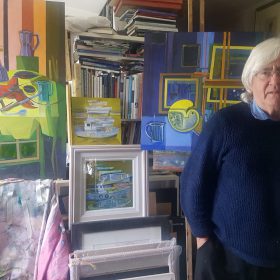 Davy Brown was born in Kilmarnock in 1950 and studied at Glasgow School of Art from 1968 – 1972. The following year he qualified as an Art Teacher from Moray House in Edinburgh before winning a scholarship to travel and teach art in America, Canada and Iceland. His career began at the age of 21 when he held his first solo exhibition at the Citizen’s Theatre in Glasgow. After being in promoted posts in Grange Academy, Kilmarnock and Ravenspark Academy, Irvine he moved to Newton Stewart in Dumfries and Galloway and from 1989 – 2002, Davy was Principal Teacher of Art at Douglas-Ewart High School, during which time he continued to exhibit in one-man shows throughout the UK. In 2002 he retired from teaching to become a full-time painter. Davy is currently the President of the Dumfries and Galloway Fine Art Society and his paintings can be seen in publication collections nationwide including the Gracefield Arts Centre, Dumfries; The British Linen Bank; The University of Leicester; The University of York. He works across a variety of different subjects including landscape and still life.

The Scottish Gallery exhibited the work of Davy Brown in July 2020 to celebrate the artist’s 70th birthday.