We are delighted to announce William Crosbie's fifth solo show with The Scottish Gallery.

'My devotion to the muse and the life it has led me has meant I have enjoyed richness of texture not readily to hand to the majority of my fellow citizens.' William Crosbie, 1990

Crosbie did enjoy the life he led, the distinct, challenging life of the devoted creative. He had a fine, enquiring mind, was deeply read and was immersed in the liberal arts; he had great technical gifts and was happy to apply these far beyond the confines of studio and easel but at the same time he recognised that a painter needed to paint and to exhibit. This determination to be engaged with the hurly burly and a prodigious work ethic have left much to be rediscovered and when his widow Anne moved from the home they shared in Hampshire last year we felt that so much unseen work deserved an airing, alongside one of his many wonderful model boats. We are grateful to the family for their faith and assistance and to Ewan Mundy for his fine introduction in the accompanying catalogue. Click here to purchase the catalogue. 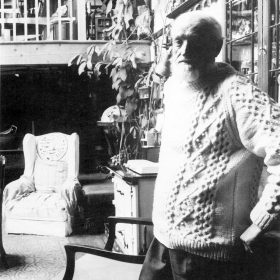 William Crosbie studied at the Glasgow School of Art from 1932-5. A travelling scholarship took him to Paris, where he worked under Fernand Léger, and took classes in History of Art at The Sorbonne and in drawing with Maillol. Crosbie was part of a group of artists and writers who were very active immediately before the Second World War painting portraits. Later in his career it was by working with architects, decorating firms and painting murals that he was able to make a living, and continue to create the paintings that he wanted to paint.

Through his career he excelled in an extraordinary variety of subjects: straightforward landscapes of Scotland, England and France; still life, the female nude, a sort of modern fête champêtre; surrealism; religious painting; portraiture, both intimate and official and the self-portrait.

“As a painter I have always worked in the belief that once you have mastered a technique or perfected a style, that’s the time to stop. Each piece of work should be a fresh beginning as far as possible.” William Crosbie, 1974.