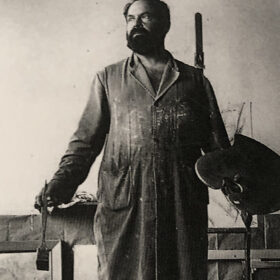 Zyw was born in Lida, Poland before moving to Warsaw at an early age. He enrolled in Warsaw School of Fine Art in 1926. A travel bursary in 1934 was to have a great effect on the young Pole, not only did it give him a taste for life outside of Poland, but it started a love affair with the Mediterranean which was to last a lifetime.

He found himself in Corsica when the War broke out, and travelled back to his home in Paris to enlist. After the French Army’s collapse Zyw escaped to Scotland to where the Polish Armed Forces were regrouping. After another spell on the front line as official war artist he settled in Dean Village in Edinburgh, before moving permanently to Italy in the 1970s. During his time in Edinburgh, he has a profound impact on the city with a number of notable exhibitions, including three with The Scottish Gallery, and later retrospectives organised by the Scottish Arts Council and the Scottish National Gallery of Modern Art. He continued to paint up to his death at his olive farm in Castagneto Carducci in Tuscany, Italy.

He had his first one-man show at The Scottish Gallery in 1945. His most recent exhibition was held in November 2020 titled Before & After.