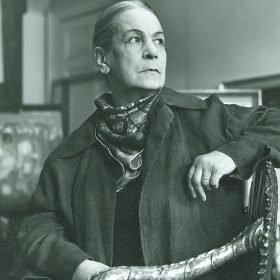 Anne Redpath was a pivotal figure in the group of painters now referred to as The Edinburgh School. She had attended the College of Art, receiving her diploma in 1917. After a lengthy spell in the south of France, Redpath returned to Hawick in the mid-1930s. Her brilliant manipulation of paint, left in delicious peaks or eked across a rough surface with a palette knife, is characteristic of the varied responses to different subjects at different times. In the last years of her output she often favoured a limited palette; perhaps a few brilliant, jewel-like notes enlivening a dark or white composition.

Redpath was an inspirational person and formed many enduring friendships. Her flat in London Street became an artistic salon, celebrated by Sir Robin Philipson’s famous, affectionate group portrait in The Scottish National Portrait Gallery. She had considerable commercial success in her lifetime, enjoying a fruitful, consistent relationship with The Scottish Gallery and then with Reid & Lefevre in London. Since her passing, her reputation has been further enhanced with retrospective and centenary exhibitions resulting in her being established as one of the great figures in 20th Century Scottish Painting.