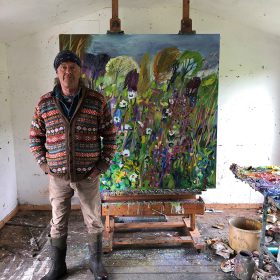 Cook was born in 1957 in Dunfermline and attended Duncan of Jordanstone College of Art in Dundee from 1979-84. He was recognised early as an exceptional talent, winning the first prize at the annual student show at the Royal Scottish Academy in 1983. He then won a travel award which took him to Paris, Amsterdam, Belgium and Cyprus. He won the Guthrie Award at the RSA in 1985 and was given Scottish Arts Council Awards in 1985, 1988 and 1989. He has exhibited irregularly but notably at The Traverse Theatre in 1982 and with the 369 Gallery throughout the following decade.

In the 1990s he was already visiting Seagreens (his current home) and staying at a cottage at Benholm, two miles to the North also frequented by Alberto Morocco and Ian Eadie. Cook travelled regularly in these years to Turkey, the Balearics and significantly, at the invitation of the Everard Reed Gallery, to Southern Africa for three months in 1997. He was able to secure the tenancy at Seagreens shortly after his return and eventually bought it in 2004. This sense of belonging is now deeply embedded; he can see the seasons change and paint the whole calendar; the daffodils of Spring, wild flowers of Summer, the Autumn skies and bleak drama of Winter are all on show: immediate, raw and compelling.