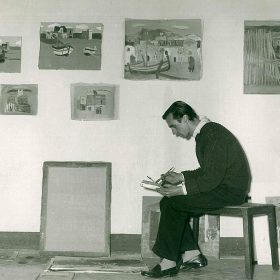 David McClure was born in Lochwinnoch in 1926. He enrolled at Edinburgh College of Art in 1947, from which point he was to be associated with a group of highly regarded young painters including James Cumming, William Baillie, John Houston, Elizabeth Blackadder and David Michie.
McClure’s work sits solidly within that well-documented tradition of 20th century Scottish Painting characterised by strength of colour and confident handling of paint. As a bold and inspired colourist McClure had few equals. He is best known for his colourful, painterly still lifes and flower-pieces, his subject pictures of children’s dreams or religious figures and later his nudes and studio interiors. Landscapes too were a significant part of his work, inspired by harbour scenes from the East Neuk of Fife or the East Coast fishing villages above Dundee. In later years he produced lyrical coastal landscapes of north-west Sutherland.