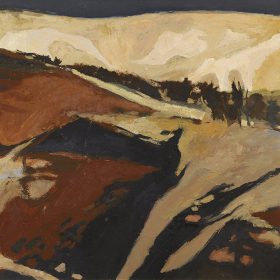 Donald Buyers was born in 1930 in Aberdeen where he attended the Grammar School and then Gray’s School of Art after which he assisted his tutor Robert Sivell in the murals at the University Union in Schoolhill. His was a quiet life, well lived, throughout which family and painting were his twin loves. A honeymoon in Paris turned into an extended stay and the School of Paris was always present in his work. Back in Aberdeen he began to teach in schools: Robert Gordon’s and eventually as a visiting lecturer at Gray’s, but he never stopped working and exhibiting. Fields and Trees, Aberdeenshire of 1962 is one of his finest works. It certainly owes something to the Modern British period, to Nash, Christopher Wood, Gillies and perhaps Robert Henderson Blyth, who was by then living in Aberdeen. But more it seems a heartfelt response to a deeply familiar landscape, understood as winter releases its grip, the uplands in the light, the banks of the river in shade, the fields and copses of trees at once real and a satisfying abstract pattern.