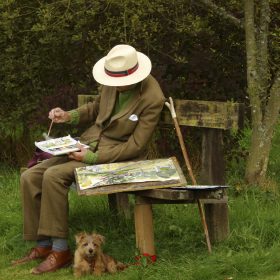 Lord Haig, son of the Field Marshall, was a prisoner of war in Colditz Castle until his release at the end of the War. The paintings and drawings he made there were exhibited at The Scottish Gallery and he went on to have a distinguished exhibiting career which spanned over 60 years, concluding with his remarkable 90th birthday show in 2008. This must be one of the most consistent relationships between an artist and a gallery in the annals of the commercial art world.

In June 2011 we hosted a memorial show and in March 2018 a major centenary exhibition. The show included work from every decade of his distinguished career post war, and demonstrated his astonishing talent in landscape and subject painting.