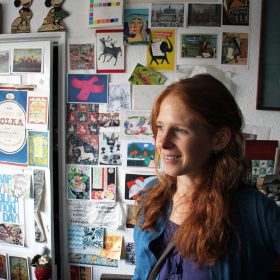 Emily Sutton was born in North Yorkshire and studied at Edinburgh College of Art and Rhode Island School of Design. Since graduating in 2008, Emily’s art works, sculptures and designs have been much sought-after. She had a major solo exhibition, Town & Country, at the Yorkshire Sculpture Park in early 2015.

“My work incorporates a love of pattern and detail and is strongly influenced by the landscape and creatures of my surroundings in the Yorkshire countryside, as well as all kinds of weird and wonderful objects found in museums and antique shops. A visit to the American Folk Art Museum in New York inspired an ongoing interest in folk art of all kinds, and I am also influenced by twentieth century illustrators such as Edward Bawden and Eric Ravilious, and the American lithographed children’s books of a similar era.”

Her love of observational drawing and eye for detail sees her transform the ordinary into the extraordinary and celebrate beauty in everyday objects and scenes. Her own home in York is a treasure trove, no surface is clear from personal relics found in antique shops, salvage yards or local car boot sales – these accumulated objects provide Emily with a constant source of inspiration which is both intimate and universal.The magical spin Emily bestows on the world has seen her much in demand as an illustrator. Emily illustrated the children’s classic Clara Button and the Magical Hat Day, for the V&A, which is now in its second edition. She has also worked with Faber & Faber, Penguin Random House and Walker Books.