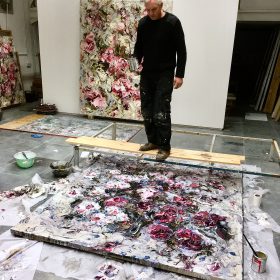 Geoff Uglow is one of the greatest painting talents to emerge from Glasgow School of Art in recent years. He won the prestigious Alastair Salvesen Art Scholarship for painting and travel in 2009 and used his time to journey around the coast of Scotland in the footsteps of famous eighteenth-century painter William Daniell. This body of work was then exhibited at the Royal Scottish Academy.

Based in rural Cornwall, Uglow looks to nature for inspiration. Several times Uglow has diarised the passing year with painted colour notes expressing the passage of the seasons by pinning the essence of a particular day. Other major projects have included his Quercus series, using the oak tree as a vehicle to chart the changing rhythms, cycles and seasons of the British landscape. For his most recent exhibition at The Scottish Gallery in 2017, Uglow found his subject in his rose garden, which he had cultivated from seed. He describes each painting as ‘a handwritten letter, a moment, which can suspend disbelief, a fragment of vanished beauty.’