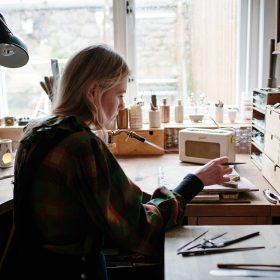 Born and raised in Northern Ireland, Grainne was immersed in and surrounded by the traditional crafts, folklore, music and fairy tales of the country. Perhaps it’s this beginning to her story that has now imbued her work with it’s somewhat contradictory nature – all at once vintage and contemporary, precious and non-precious, spontaneous and ordered, junk and treasure. Each piece, carefully choreographed, the arranging and re-arranging of little objects, and precious things, moved and re-placed until they establish a relationship to each other and tell a story to the viewer.

Moving to Edinburgh in the late eighties to study at Edinburgh College of Art led to Grainne becoming an avid collector of antiques and ephemera. When her parents visited her in Edinburgh, they would go on antique-buying trips for their shop at home in Northern Ireland, and Grainne would tag along. Her collections became her inspiration, and her inspiration became her work. This use of unexpected, and delightfully juxtaposed, materials is where it all started, and 25 years later, is now firmly her trademark. Grainne’s work has been exhibited internationally and, in 2007, she was shortlisted for the Jerwood Applied Arts Prize.