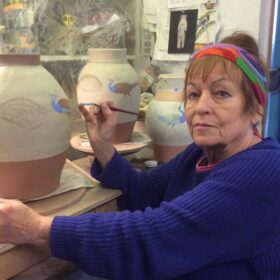 Jill Fanshawe Kato studied painting at Chelsea School of Art and pottery at the school of Yosei Itaka and at the Musoan Karatsu Pottery School in Japan. She established her studio in North London in 1977 and has exhibited internationally, especially in Japan and the UK. She regards her work as sitting somewhere ‘between sculpture and painting’. Her work has been described as possessing an ‘atatakai’ quality which is a Japanese term for ’emotional warmth implying that something is breathing.’

‘Working in clay is a kind of alchemy. I like the unpredictable results of fuel burning kilns such as gas and the warmth this gives to the clay. I mostly hand build, coil and slab, but also throw, alter and assemble pieces, which are usually one-off. Imagery is added with coloured slips and fired to 1270c. Recently I established my new studio in Devon and have forests and wilderness on my doorstep, which has given me a new freedom. Ancient stone circles, the South West Coast Path, the red and white clays of Devon are all touch points for my work, as is growing plants and seeing birds and other wildlife from day to day. It is a real journey of discovery as one inspiration leads to another.’ – Jill Fanshawe Kato, 2020

Jill was the subject of her fifth solo exhibition, Changing Seasons, at The Scottish Gallery in December 2020.