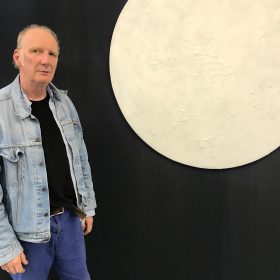 McFadyen was born in Paisley in 1950 and brought up in Renfrew. As a teenager, he attended Saturday morning classes at Glasgow School of Art and in 1966 his family moved to England. He attended Chelsea School of Art from 1973-77 and has lived and worked in London over the last 40 years. He has had over 40 solo exhibitions and his paintings are in 30 public collections including the Tate, British Museum, V&A and Scottish Gallery of Modern Art as well as corporate and private collections in the UK, Europe and the USA. In 1981 he was appointed Artist in Residence at the National Gallery London and in 1991 he made a solo exhibition on the Berlin Wall at the Imperial War Museum London which toured to Kelvingrove Gallery in Glasgow, and the following year he designed sets and costumes for Sir Kenneth MacMillan’s final ballet ‘The Judas Tree’ at the Royal Opera House in London.

McFadyen has a long association with The Scottish Gallery. In the 1980s he exhibited several times with The Gallery’s London branch in Cork Street and the Dundas Street gallery in 1995. In 2005 The Scottish Gallery exhibited the artist’s work in a disused industrial building at Causewayside during that year’s Edinburgh Festival.