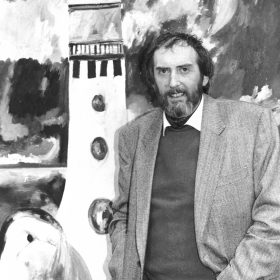 John Bellany was born in 1942 in the Scottish fishing village of Port Seton. He attended Edinburgh College of Art from 1960 to 1965 and the Royal College of Art from 1965 to 1968. His early work in Northern European Expressionist-Realist tradition allied to personal symbolism and iconography, often drawn from his family’s sea-faring past.

His work is often highly challenging and at times autobiographical as epitomised by a series of brutally unflinching self portraits produced in hospital following a liver transplant in the 1980s. He is considered an artist of international standing, with works in both MOMA and Metropolitan Museum in New York as well as the Tate Gallery, London. He was elected Royal Academician in 1991. In 2016 the National Galleries Scotland hosted a major retrospective of his work to mark the artist’s 70th birthday.

Please click here to view prints by the artist