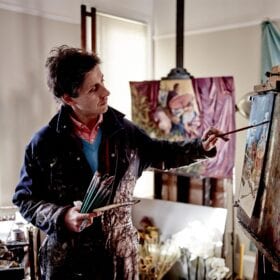 Lachlan Goudie studied English at Christ’s College, Cambridge before completing a Fine Art Degree at Camberwell College of Art. He regularly exhibits in his hometown of Glasgow, as well as Edinburgh, London and New York. He has won numerous awards, and in 2013 he was elected a member of the Royal Institute of Oil painters in London. As well as a painter, Lachlan works as a successful broadcaster and author. His popular 4-part BBC series, A Story of Scottish Art, led to the publication of an engaging and insightful book of the same name, to positive reviews.

The scope of Lachlan’s work is broad, incorporating portraiture, still life and landscape painting. He was schooled in painting by his father from an early age, and is a keen advocate for the value of technique, craft and tradition in contemporary art. Frequent painting trips abroad, during which he sketches in the open air whilst on the road, allow him to observe, document and celebrate the world around us.

‘I am a Glasgow boy. I was born in that city and my father, the artist Alexander Goudie, studied and taught at the Glasgow School of Art. The legacy of those late 19th Century artists who came to be known as the ‘Boys’, made a deep impression on my dad. When I was a young apprentice painter, he taught me their techniques and alerted me to the qualities which distinguished their work; assiduous control of tone, the use of square-edged brushes, an affinity with those French painters whose approach combined realism and naturalism.’
– Lachlan Goudie

We are looking forward to hosting a major solo exhibition in November 2022.