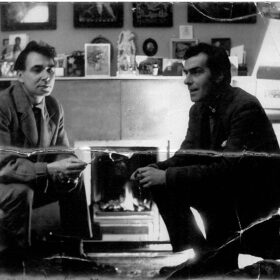 Robert Colquhoun was born in 1914 to working class parents from Kilmarnock, Ayrshire. His art teacher, James Lyle, helped him win a scholarship to Glasgow School of Art (1933-1937), and he then won a travelling scholarship to France and Italy along with his lifelong friend, lover and companion, Robert MacBryde with whom he is largely associated. Solo exhibitions under the guidance of Duncan MacDonald at the Lefevre Gallery on Bond Street were sell out sensations and the phrase ‘The Golden Boys of Bond Street’ was coined. During this high period, Colquhoun and MacBryde showed in The Scottish Gallery, 1944, British & French Artists. He later became a master of the monotype technique as he slowly moved away from the canvas. Success post 1951 saw The Roberts, as they were known to their friends, fall into a sharp decline into a life of poverty. Robert Colquhoun died in 1962.