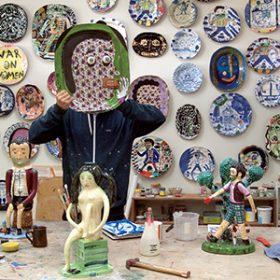 Stephen Bird was born in The Potteries, trained at Duncan of Jordanstone in Dundee and, making his home and a huge international reputation from Sydney, he remains aloof from any artist pigeon-hole. He works with both paint and clay and has also undertaken a number of site-specific sculpture commissions. Bird’s influences and interests include English figure and slipware traditions and paintings and artefacts culled from his extensive travels through India, Asia and Australia. His use of words, collage and found objects as part of the final work, results in powerful multi-dimensional imagery which reflect on the global, transcultural nature of myths and ceramic archetypes.

‘I began my Industrial Sabotage series in 2006 as part of an exhibition and research at the Potteries Museum Stoke on Trent. I use the term Industrial Sabotage to explain how I have re-interpreted the tradition of mass produced ornament ceramics made in Stoke on Trent in the 18th and 19th centuries. Initially I looked at the emotional aspects of the figurines and then went on to explore political messages, prohibition and violence as a way of using ceramics to comment on sensitive current issues. In the last phase of Industrial Sabotage I am looking at the irrational, the absurd and the ridiculous, and trying to drive my work towards some kind of disconcerting hiatus in order to re-examine the figurine, the figurative vessel, its context and its contemporary significance.’ – Stephen Bird

Stephen Bird was the subject of a solo exhibition – Kiln Gods – during the International Festival, August 2019. View and purchase a copy of the catalogue to accompany Kiln Gods here.